Don't Listen to Everything You Hear 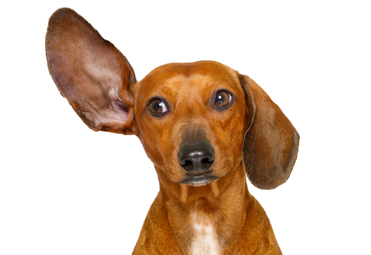 What if you could increase your battery life tenfold or more — compared to legacy system designs — without sacrificing accuracy or performance? If it sounds like an impossible dream, it isn’t. You can boost battery life while maintaining performance in a voice-first device by making sure that your device hears everything, but that it only truly listens to the important things. That’s how your brain works, so why not your device?

Your ears are constantly hearing all the sounds around you. But what happens between the time that all the ambient sound enters your ears, and the time when the sound is interpreted as a word by neurons deep in your auditory cortex? During that interval, the sound travels through many layers of neurons that pick out progressively complex features of the sound and pass only what’s important to the next layer. Fundamentally, the brain saves its most complex analyses for the most relevant sounds, efficiently saving its energy for what’s really important.

That’s why your brain only processes meaning from words when you hear voice, but doesn’t try to interpret words when you hear a dog bark. Data relevance is also context based, so that is why you can focus on the specific conversation you're having with someone, even when there are other voices around you. On the other hand, your 15-year-old will hear his smartphone ring but won’t hear you asking him to help clear the table. You may call this selective hearing, but in this case, the parent’s voice is the ambient noise and the phone ringing represents the important data – so that’s the data that are processed.

Aspinity’s new RAMP analog processing chip enables voice-first devices to use this same power-efficient methodology by adding an early analog inferencing layer to the traditional always-listening architecture. Functioning like an intelligent gatekeeper, the RAMP chip in a voice-first device distinguishes voice from other sounds while the sound is still in its natural analog state. This means near-zero system power when only the microphone and the RAMP are powered. The microphone and the RAMP chip hear everything, but the RAMP prevents downstream higher-power digital processors from listening for a wake word unless the sound is actually voice. This revolutionary architecture eliminates the power penalty of digitizing and analyzing irrelevant sound data and extends device battery life by up to 10x.

Since the RAMP incorporates analog machine learning, you can also train the integrated analog neural network to detect many types of sounds beyond voice, such as glass breaks or baby cries (or even a cell phone ring). Whichever type of battery-powered always-listening device you’re designing, one thing remains common to all: While it’s critical to hear everything, it’s wasteful to spend significant amounts of power listening to it all.

Find out more and request a demo of RAMP technology.

Show Me a Demo
Aspinity Blog

Don't miss out on new blog posts from Aspinity. Subscribe here to receive our latest posts and news.